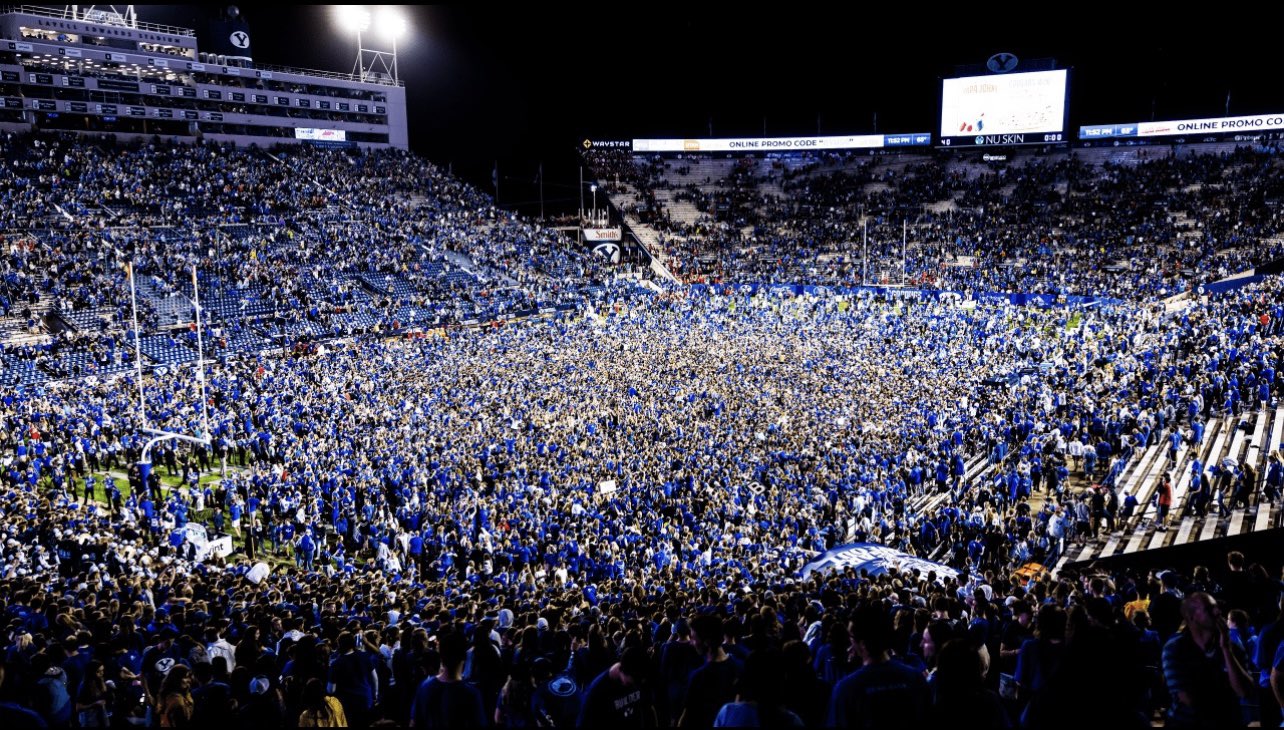 Everybody, welcome to recruiting season.

BYU wrapped up their regular season finale with a victory over the Stanford Cardinal, 35-26.  And while the Cougars were able to finish out the regular season with a win, the season didn’t feel like a success to many.

While Jaren Hall was spectacular in every sense of the word throughout the season, throwing for over 3,000 yards, 31 touchdowns to just 6 interceptions, the Cougars were just barely able to squeak out a 7-5 record.

Earlier this week however, it was announced the University would be going a different direction with their defensive staff in hiring Coach Jay Hill from Weber State.  And it seems immediately as he stepped foot on BYU’s campus he got to work.

“I’ll tell you this much, he closed out a big time 4 star recruit last night.  He sealed the deal.  Already, on day 1 of the job”

That should be music to every BYU fan’s ears.  When Hill was brought in, he made it clear that recruiting would be a top priority for him, and incredibly early on in his tenure we are already starting to see the fruits of those labors.

The question now is, who is this mystery recruit?

Many believe it is Siale Esera, the standout commit from Timpview High School.  Esera has been committed to the Cougars since early September, but other coaching staffs across the country have continued to prioritize the linebacker, particularly UCLA.  UCLA brought in Esera on an official visit last weekend, and it’s clear they made a big impression.

If this is in fact the recruit Spencer was referring to, many would perhaps be disappointed that he was not referring to another 4 star recruit seeing as how Esera is already committed to the Cougars.

Esera has been committed for so long to the Cougars, that people forget how much of a game changer he would be in the LB corp for BYU.  Losing him would be a massive loss, and if Hill was in fact able to affirm Esera’s commitment to BYU, this should still be considered a major win.

The other recruit people have speculated could be the mystery recruit is cornerback, Smith Snowden.

Son of former BYU running back great Will Snowden, Smith preps at Skyridge where this past season he led the Falcons to a 6A Championship over Corner Canyon.

Utah has long held the advantage for Snowden’s eventual signature, but could Hill’s hiring at BYU have potentially flipped the table?

It’s no secret that cornerback has been one of the most difficult positions to recruit at BYU, and getting Snowden would be a massive victory.  He would have the chance to come in as a freshman and immediately start for the Cougars, and be able to continue the Snowden legacy at BYU.

Regardless of who the mystery recruit is, the future is bright at BYU.  Bringing Jay Hill on as the defensive coordinator is a huge step in the right direction to getting the defense where it needs to be.  Results won’t be instant, but fans can expect a new type of tenacity both in coaching and on the recruiting trail.

Within CougConnect’s VIP chat, many people have speculated and given reasoning for both players.  There are many people involved on the site that are highly connected to the situation and have dropped several key nuggets that would get any BYU excited.

So now we wait.  Whether it’s Snowden, Esera, or someone completely different, only time will tell.

Do you want access to articles that are filled with insider VIP info?

By subscribing, not only are you finding out VIP information before the rest of the fanbase, but you are also supporting our student athletes.

90% of all profits goes directly to the players, and helps us compete with the top Universities and their NIL initiatives.  YOU can make a difference.  Subscribe at cougconnect.com